The Sun Lakes Sheriff's Posse is providing the following information to help you recognize potential hazards around your desert home. This information is not meant to be all inclusive but centers around those species of spiders, scorpions, lizards, bees and snakes that are considered the most dangerous to humans. We strongly urge you to call 911 and seek medical assistance immediately if you experience any bites, or stings, from the following "original residents" of Arizona. 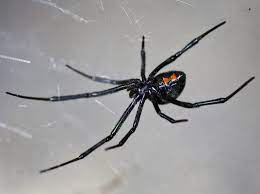 Black Widow: The female Black Window spider is aggressive and easily recognized by the distinctive reddish-orange "hourglass" design on its underbelly. These spiders spin sticky, strong and seemingly randomly shaped webs. Because these spiders inject a neuro-muscular toxin, symptoms of their bite may include a sharp stinging sensation at the bite point, nausea, vomiting, headache and dizziness. Applying an ice pack at the bite point may alleviate some of the pain. Most symptoms disappear within approximately twenty-four (24) hours and the bite is not lethal for healthy adults. However, small children, elderly persons and individuals with high blood pressure, allergies or breathing problems should call 911 for medical assistance immediately.

BARK SCORPION: This scorpion species is considered deadly. If you are stung, call 911 for immediate medical assistance. Symptoms may include severe pain at the sting point, tingling or prickling at the sting point, and extreme sensitivity of the sting point area when touched. Additional symptoms may include restlessness and possible convulsions. The most severe cases may require treatment with an anti-venom serum. The Bark Scorpion is light tan in color and approximately one or two inches long. They are active at night and are seldom seen during daylight hours or in severe cold weather.

Note: There are approximately thirty-eight (38) species of scorpions living in Arizona. All species of scorpions sting causing immediate pain but little to no swelling or redness at the sting point. Healthy individuals are the least at risk. However, small children, elderly persons or persons with high blood pressure, allergies or breathing problems should immediately call 911 for medical assistance. 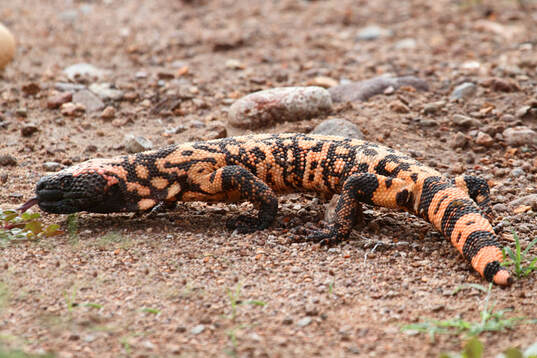 Gila Monster: This lizard is the largest in the United States and one of two venomous lizard species in the world. The Gila Monster can grow to twenty (20) inches in length and weigh up to two (2) pounds. These lizards have blunt, thick bodies and blotchy skin colorings that mix black, orange, pink and yellow. The Gila Monster is normally very gentle but can become aggressive if cornered or picked up. When aroused, the Gila Monster bites with a chewing action to better inject its venom. If you are bitten, call 911 for immediate medical assistance. Also, elevate the bite point and rinse it with soapy water to dislodge any of the Gila monster’s teeth that may still be in the bite point. Gila Monsters spend 90% of their lives underground but often sun themselves on rocks or ledges. Exercise care when walking, running or rock climbing so that you do not accidentally step on or grab a Gila Monster. Owning or killing a Gila Monster is illegal.  They are a protected species.

AFRICANIZED BEES: This species is extremely aggressive when aroused. They swarm approximately every six (6) weeks and may produce multiple swarms at those times. The Africanized Bees like to occupy very small spaces such as rock crevices, meter boxes, holes in the ground or trees, mailboxes, cracks in eaves or roofing and even empty soda cans. Do not approach a swarm of Africanized Bees under any circumstances. Try to move quickly, and quietly, away from the area. While each Africanized Bee can deliver only one sting, they attack in swarms and it is usually the volume of stings that causes human fatalities.

There are approximately eleven (11) species of Arizona Rattlesnakes. All of these species are venomous and you should call 911 immediately if you are bitten. The best way to avoid a rattlesnake's attack is to practice the following preventative measures:


If you have pets, please know that they can be seriously injured or killed by the previously mentioned "critters." If you suspect that your pet has been bitten, time is of the essence for immediate medical care. First Regional Animal Hospital, located on Warner Road, just west of Alma School Road, is a twenty-four hour/seven days a week Emergency Pet Care facility. This facility can be reached by calling 480-483-7106. Contact this facility if your veterinarian's office is closed.

The Sun Lakes Sheriff's Posse hopes that the information provided in this article will help you become more aware of the "critters" that inhabit the desert environment around us. By knowing what to watch out for, each of us will be able to experience the diversity and beauty of our state's outdoor areas with safety.